Under Peterson’s leadership commencing at the dawn of the .COM “internet boom” of the late 1990’s, and in business for twenty years thereafter, Quepasa amid rapid growth became one of the top-20 social networks in American history, covered by major media (see this article) and Wall Street analysts, achieving a base of over 40 million active users (total combined membership of all sites over 100 million users) and a peak stock market capitalization in excess of $450 million USD.

Quepasa was continually ranked as the #1 U.S. Hispanic online community, beating competitors Starmedia and Yahoo! en Español in competitive rankings. Peterson was the largest single shareholder of the company and held the positions of Founder, CEO, Chairman, President, and Chief Technology Officer.

Mr. Peterson is a lifelong software engineer and data architect who has received national and international media attention for his accomplishments in the technology sector.

Jeff has served on the Board of Directors of privately and publicly held technology related companies as an investor and in management capacities in the United States, Latin America and Asia. In connection with private and public-sector initiatives, Peterson worked with two Mexican Presidents as well as the former President of Costa Rica (Figueres) and the former President of the Philippines (Aquino).

Throughout almost ten years of market volatility, management changes, complex litigation and a recovery from the .com crash of 2001, the value of Quepasa Corp. grew hundreds of millions of dollars of market value two times under Peterson’s leadership. 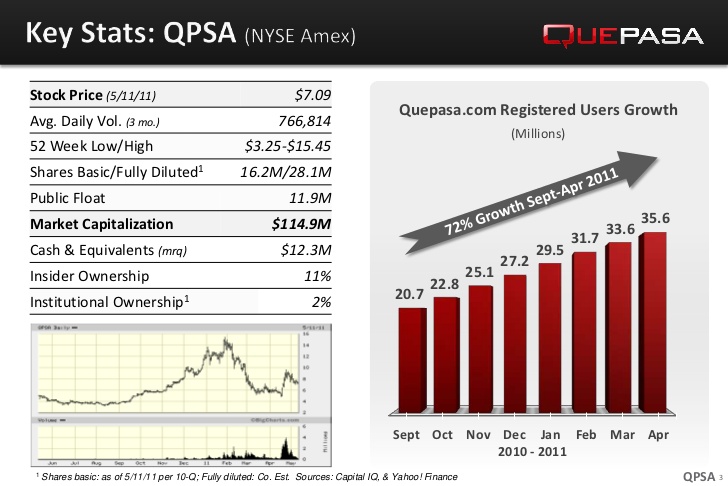 Shortly after the company went public on the Nasdaq Stock Market in 1999, Peterson was ousted from Quepasa by Gary Trujillo, who Peterson had only recently hired as Quepasa’s CEO sixty days earlier. Under Trujillo, Quepasa’s share price lost almost the entire market value it had gained under Peterson’s first term leading the company.

As the top bilingual English/Spanish online community from 1998-2012, Quepasa was the first Social Network to trade on a national stock exchange in United States history. The second was Chinese Social Network RenRen in the year 2011, followed by Facebook in 2012. 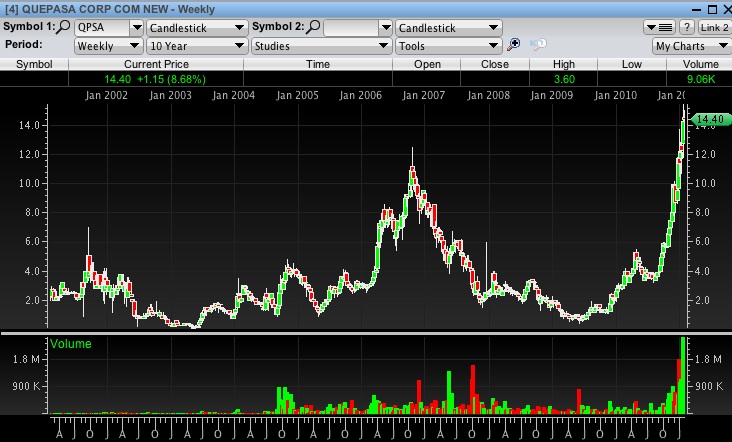 After shares recovered more than $150 million of stock market value from 2002-2007 under Peterson’s second term as CEO, then-venture capitalist Richard Scott joined Peterson’s restored, thriving Quepasa (2.0) shareholder group in 2007. A few years after his acquisition of Quepasa, (see this video) Rick Scott became Governor of Florida and now serves as a United States Senator from Florida.

At the time of Governor Scott’s acquisition, Quepasa was again experiencing rapid growth and a market value of nearly $200 million, listed as the largest pure-play bilingulal English/Spanish, U.S. Hispanic-targeted Social Network in the history of North America, primarily serving The United States and Mexico.

In 2011, Quepasa, amid continuing rapid growth, completed a corporate merger with the myYearbook company.

In 2012, Quepasa changed its corporate name to MeetMe. 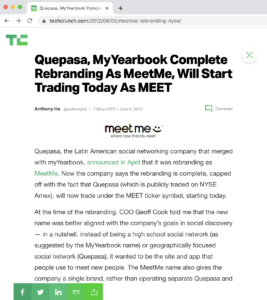 Post-merger, Quepasa’s registered base of 40 million active users was combined with that of MeetMe. The company is still in business today with the same taxpayer ID and SEC filer number as when Jeff first started it, with the new name “the MEET Group, Inc.” (Nasdaq: MEET).

After several additional acquisitions (Skout acquired for $54.6 million. Tagged and hi5 acquired for $60 million, see this article.) it is the new corporate owner of famous Internet brands Skout, Tagged, and hi5.

UPDATE: On March 5, 2020, it was announced that the MEET Group, formerly known as Quepasa Corp., would be acquired by NuCom Group, corporate parent of eHarmony, for $500 million USD.

It was announced that the acquisition was completed in September of 2020. The surviving business entity is called “ParshipMeet Group.” The company currently employs a workforce of more than 1,100 in eight offices worldwide.